CSG Aerospace has unveiled a solution integrating drones into transportation 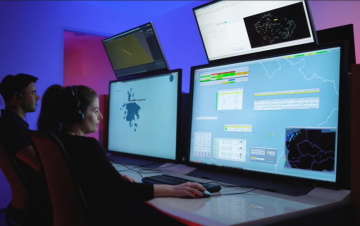 The prestigious World ATM Congress event in Madrid saw the unveiling of CSG Unmanned on Wednesday, 22 June. It is an open solution that ensures safe operation of unmanned vehicles in the airspace. The system communicates with air traffic control by linking the air traffic controller with the pilot, the service provider and the customer. In addition to calculating the route, the system can immediately react to unexpected situations and adjust the flight path of the unmanned vehicle.

The CSG Unmanned solution developed by CSG Aerospace, the aerospace division of the industrial-technological holding CSG, is designed for a new segment – especially for the expanding freight shipping, but also other services in the airspace using unmanned vehicles.

“Simply put, it is software that connects the customer, the carrier, air traffic control and other participants. The carrier enters the flight plan in the application environment, and this information is automatically shared with the air traffic controller as well as the customer who is informed about the shipment or other services ordered. The system uses blockchain technology for flight records,“ says Aleš Kvídera, CEO of CSG Aerospace, about CSG Unmanned.

CSG Aerospace specialists and developers, in particular from CS Soft and Atrak, have been working on the system for a number of months; the system can be easily deployed as soon as legislation allows it. CSG Unmanned is also the first product presented under the banner of CSG Aerospace, a division of the industrial-technological holding Czechoslovak Group established in 2018. The product is the result of collaboration and synergy across companies.

CSG Aerospace is exhibiting on a joint stand at the World ATM Congress which is taking place in Madrid from Tuesday, 21 June to Thursday, 23 June. In addition to the aforementioned software companies CS Soft and Atrak, the radar manufacturers Eldis and Retia from Pardubice are also presenting their products in Madrid. The World ATM Congress is the world's largest air traffic control exhibition and conference. It is co-organized by the Civil Air Navigation Services Organization (CANSO) and the Air Traffic Control Association (ATCA).

CSG Aerospace is a division of the Czechoslovak Group holding, which represents several Czech and Slovak companies operating in aviation-related fields. The companies complement one another with their products and services, offering customers comprehensive and professional solutions in many areas of both the civil and security sector. The division consists of ELDIS Pardubice, RETIA, EUROPEAN AIR SERVICES, Česká letecká servisní, CS SOFT, ATRAK, JOB AIR Technic, and Slovak Training Academy.