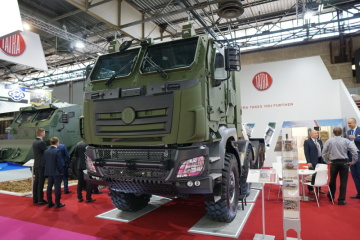 The most important European trade fair of military technology and defence technologies Eurosatory is held in Paris. On the very first day, the MORANA self-propelled howitzer on a Tatra chassis was presented at the joint stand of the companies of the CZECHOSLOVAK GROUP (CSG) holding and the TATRA TRUCKS car manufacturer. Other products that have their premiere at EUROSATORY are the TREVA-30 recovery vehicle and the Tatra Phoenix with an armoured cabin.

"TATRA is one of the world's best-known industrial brands from the Czech Republic and I am proud that it belongs to the Czechoslovak Group. At Eurosatory, it presents a new vehicle on a Tatra Phoenix chassis with an armoured cabin, and the Tatra chassis is also the basis of the TREVA-30 recovery vehicle developed by our company EXCALIBUR ARMY," says Michal Strnad, owner of the Czechoslovak Group.

Tactical recovery and removal car TREVA-30 is built on the chassis Tatra Force 8x8. Conceptually and generationally, it is a completely new mean of military vehicles´ recovery of Czech provenance. The car is equipped with an armoured four-door cab, which is of the same type as the MORANA howitzer and accommodates, in addition to the driver and operator, the crew of the towed vehicle. TREVA-30 has a winch with a base thrust of 25 tons and a crane with a lifting capacity of 30 tons, on the development of which ECALIBUR ARMY cooperated with the Czech company ČKD Slaný. To move cars, armored wheeled vehicles and other equipment, it uses an installed hydraulic fork in the rear of the vehicle.

The world novelty was also introduced by carmaker TATRA TRUCKS. It is a military heavy truck of the proven Tatra Force 8x8 series, but it is equipped with a completely new armored cabin with ballistic and mine resistance level 3 according to STANAG standards. The cab was developed by the partner company TATRA DEFENCE VEHICLE, which also produces it. TATRA TRUCKS supplies the Tatra Force and Tatra Tactic model series for the armed forces, but the newly exhibited product proves that the Tatra Phoenix model range is also beginning to be used more and more in this area.

The Eurosatory exhibition was first held in 1967 and has gradually developed into the most important defence fair in Europe. The CZECHOSLOVAK GROUP stand with an area of over 500m2 represents this year's largest Czech exposition. At the Paris fair, however, not only private companies are presented, but also states and their armies, led by the French one. The fair is a unique forum for getting acquainted with the latest technological trends in defense and establishing business contacts.

CZECHOSLOVAK GROUP (CSG) is a holding following the tradition of Czechoslovak industry. It supports the development of traditional Czech and Slovak companies engaged in defence and civil industrial production and trade. More than 8200 employees work in companies incorporated into the CSG holding and in related companies. In 2021, the consolidated revenues of the holding amounted to CZK 14.4 billion. The main branches of CSG are mechanical engineering, automotive, railway, aerospace and defense industries. Thanks to the strong pro-export orientation of the holding, CSG's products can be found on all continents and the number of csg customers is constantly growing.

In 2013, the joint-stock company Tatra Trucks took over the world-famous brand and Kopřivnice car manufacturer, which underwent a successful restructuring after a change in the ownership structure. In addition to standardized model series, it also produces special trucks tailored to the customer's requirements. The domestic markets in the Czech Republic and Slovakia are very important, a large part of the carmaker's production is also intended for export to dozens of countries around the world. Tatra Trucks a.s. employs more than 1200 people and more than 600 others work in the subsidiary Tatra Metalurgie a.s. focused mainly on foundry and forging.