A-FilmTeensFest 2021 has announced the winners 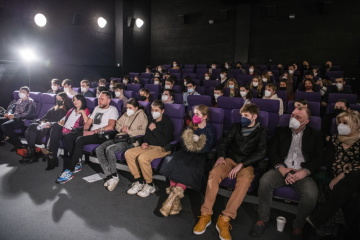 The Award Ceremony of A-FilmTeensFest took place on December 4th, 2021 in Prague „Kino Pilotu“. The audience was formed mainly by the Czech directors and other crew members of Czech winning films, and sometimes also of their family members.

On Saturday, December 4th, 2021 at 2:30 p.m. the winners of the International Online Film Festival of Children and Teens Films A-FilmTeensFest were officially announced at “Kino Pilotů” in Prague. The awards were distributed by some members of the jury: the actress Nela Boudová, the director and camerawoman Jana Hojdová, and the journalist Jan Tuna. The ceremonial afternoon was moderated by the singer Jana Rychterová. Other members of the jury were: the actor Marek Lambora, the screenwriter Iva Jestřábová-Kašpárková, directors Barbora Chalupová and Robin Kvapil, the editor Martin Mlynarič, and the animator Michael Carrington.

A-FilmTeensFest, which started on 14th of November, screened 170 audiovisual works from 22 countries all over the world. The audience had the opportunity to watch 32 film sections on the website https://afilmteensfest.com, each section was around 35 minutes long. The screened films competed in 5 categories according to genre and 4 age subcategories. The three-week event finished at midnight, December 5th. After the end of the festival, the recordings of various accompanying events (Q&As, workshops and others) will be available on the web in their original language and in English or Czech translations. Workshops were held in schools in Prague and Mšeno on the themes: “Fake News and Contradistinction of Information”, “Cyberbullying and Mental Health of Youth in the Age of Social Media” (in cooperation with the company Fak(e)ticky) and “Do Not Be Afraid and Start” (conducted by two Czech documentary filmmakers and online by an English lecturer from the “Sparks” organization from London).

55 prizes in total were awarded: 36 Awards (three of them were audience prizes) and 19 Special Recognitions. The winners among the fiction films of various age categories were: The Butler And The Ball (USA, A.Chan-Possemato), Signals (participants of Cachinus De Chines workshop, Spain), Czech Revolution (A.Korb and S.Piluchová from Michael High School) and Canadian Solitude (F.Coker). Among the documentaries, the outstanding examples were: Wavy Head (Canada, M.Shoham), Beautiful Days (Greece, K. Pashjari), S?te girls (Spain, P.Jimeno and A.Ribagorda) and a collection of teen docs from Pakistan. In an immense competition among animations, first places were granted to: Bad Bugs (USA, B. Wright), the Czech movie Jakub Jan Ryba Through Children´s Eyes (pupils from the primary art school “Jakub J. Ryba in Rožmitál under Třemšín”) and Irish FOMO (K.Meggs and M. Hendrickson). The Australian director of the movie The Quiet Radheya Jegatheva received the first prize in the oldest animation category, and also the Ben Barenholtz Award (the famous American producer and distributor) for a significant contribution to the field of international youth films. Marie Klowersová, the director of Wandering with the Likesroaming Family obtained the second prize in the same category, and an Award for The Best Czech School Film as well. The best experimental films were: Hello Frisco (Great Britain, A.Bounds) and the Czech Kolektiv (Stela Konečná). In the last category “Other Videos” (jingles, music videos, ads etc.), the Irish music video We Create Magic, the Czech clip Stay Alive (M.Lada), and the American Diana´s Best (M.Johnson) all won. The most successful movie among the audience was the Czech Klam (F.Špinka and Š. Hartl). The Award for The Best Czech Out-Of-School Film was given to Surviving in Nature according to Jim Křovák, made by the Abrhám brothers. The South Korean director Taeyang Lee received The Award for The Best Foreign Film for his film Superstar. Petra Peštová from the Primary Art School of “Jakub J. Ryba in Rožmitál under Třemšín” obtained the Vojtěch Jasný Award (one of the most acclaimed directors in the history of Czech cinema) for a significant contribution to audiovisual education in the Czech Republic.

The media partner was “Radio Junior”, one of the Czech Public Broadcasting stations. Thanks to companies such as Instax, Foto Skoda, O2 Clever School, Pompo, Bombus Energy, the National Film Museum, Czechoslovak Commercial Bank, Prague Energy, Créme de la Créme and Fruit Svetozor, the filmmakers could receive valuable prizes, among them a film workshop for one week during the 2022 summer holidays, organized by the Artistic Agency Ambrozia (winners of The Best Czech Out-Of-School Film Prize will participate).

Apart from individual spectators and filmmakers, the festival program was mediated to 55 schools and 12 children´s homes and health resorts in different parts of the Czech Republic. From every school there were on average 175 pupils or students participating (in the case of smaller schools there were around 50 pupils on average, with bigger schools there were up to 400 participants). From the available statistics, online films were streamed exactly 9346 times. At least 8200 spectators were counted from all available sources (most probably even more; 97 % of them were from the Czech Republic).

“Thanks to the financial support of the Czech Ministry of Culture, Foundation Net4Gas, and the Administrations of the Districts of Prague 1 and Prague 10, we were able to organize the second year of this event despite all the obstacles. I am also delighted that the enthusiasm of the audience for the children and teens movies has increased significantly in the Czech Republic. For next year, we are planning to make A-FilmTeensFest for even more spectators, as well as for at least twice as many schools. One of our main goals is to connect emerging Czech authors with foreign ones and to recommend their films to international film festivals of children and youth films in the whole world”, says the director of the festival and of the public service company “Adonai for People”, Zuzana Dražilová.

The whole executive team cordially thanks all the partners, people who cooperated with the festival and organizations who helped and supported the festival, among others the members of “Youth Cinema Network”, the Pakistani organization “The Little Art”, the Canadian festival “Reel Youth” and the South Korean festival “BIKY”. The results of all winning movies and all other information is available on our webpage https://afilmteensfest.com.