China Evergrande Group today again defaulted on interest payments to international investors. DMSA itself is invested in these bonds and has not received any interest payments until today's end of the grace period. Now DMSA is preparing bankruptcy proceedings against Evergrande and calls on all bond investors to join it.

China Evergrande Group, the second largest real estate developer in China, defaulted on interest payments on two bonds back in September, with the 30-day grace period still ending in October. However, shortly before the end of the grace period, the public was misled by rumors about alleged interest payments. The international media also took the rumors for granted. Only the DMSA - Deutsche Marktscreening Agentur (German Market Screening Agency) already recognized the default at that time and proved in a study that the bankruptcy of Evergrande, the world's most indebted corporation, could ultimately lead to a "Great Reset", i.e. the final meltdown of the global financial system.

(Note to journalists: See DMSA press releases dated Oct. 25 and Oct. 29, 2021, and the DMSA study "The Great Reset - Evergrande and the Final Meltdown of the Global Financial System"; all available via the DMSA homepage www.dmsa-agentur.de)

"But while the international financial market has so far met the financial turmoil surrounding the teetering giant Evergrande with a remarkable basic confidence - one can also say: with remarkable naivety - the U.S. central bank Fed confirmed our view yesterday," says DMSA senior analyst Dr. Marco Metzler. "In its latest stability report, it explicitly pointed out the dangers that a collapse of Evergrande could have for the global financial system."

In order to be able to file for bankruptcy against the company as a creditor, DMSA itself invested in Evergrande bonds, whose grace period expired today (Nov. 10, 2021). In total, Evergrande would have had to pay $148.13 million in interest on three bonds no later than today. "But so far we have not received any interest on our bonds," explains Metzler. He adds, "With banks in Hong Kong closing today, it's certain that these bonds have defaulted."

(Note to editors: Exact details of the bonds that have defaulted so far can be found in the appendix to this press release).

Particularly problematic for Evergrande: all 23 outstanding bonds have a cross-default clause. "This means that if a single one of these bonds defaults, all 23 outstanding bonds automatically have 'default' status" DMSA senior analyst Metzler knows. However, this does not automatically result in a bankruptcy for Evergrande Group. To determine bankruptcy, a insolvency petition must be filed with the court. This can be done either by the company itself or by one or more of the company's creditors. And this is precisely what is now planned. Metzler: "DMSA is preparing bankruptcy proceedings against Evergrande. We are already holding talks with other investors in this regard. We would be pleased if other investors were to join our action group."

For the DMSA expert, it is clear: "As soon as a court opens insolvency proceedings, Evergrande will also be officially bankrupt - and that is only a matter of days." 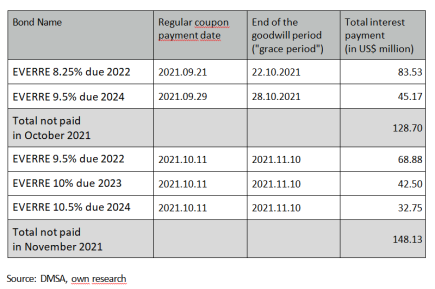 DMSA Deutsche Markt Screening Agentur GmbH, is an independent data service that collects and evaluates market-relevant information on companies, products and services. DMSA sees itself as an advocate for consumers, private customers and intelligent investors. The claim: to always look at companies and providers, products and services through the eyes of the customers. The customers are the focus of DMSA's work. For them, important and decision-relevant information is bundled and presented as market screenings. The aim is to create more transparency for consumers when selecting products, investments and services.