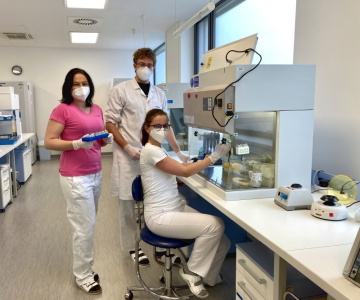 On 1 March 2021 one of the first diagnostic products that can quickly identify the two most serious SARS-CoV-2 variants was launched by GeneProof, a Czech biotechnology company. This new PCR test can reliably and quickly detect two SARS-CoV-2 variants that are currently spreading rapidly: the South African variant and the British variant.

Both variants pose a threat because they carry mutations that allow the virus to reinfect people that have already been infected. Currently available COVID-19 vaccines may also be less effective against these variants.

The first variant is the South African variant, also known as the B.1.351 strain. This variant carries the E484K mutation, which allows the virus to evade the antibodies produced after having had COVID-19 disease or after being vaccinated. It is crucial that this variant be identified among people testing positive for COVID-19 and its further spread stopped.

The second variant is the British variant, also known as the B.1.1.7 strain, which emerged in southern England in late 2020 and is currently spreading quickly throughout all of Europe. This variant is highly contagious.

Up until now it was only possible to detect these variants using viral genome sequencing, which involves demanding, costly procedures that only state-of-the-art laboratories can perform. Therefore, there is growing demand for a simple, fast method that can determine variants in any laboratory that uses the PCR method. Now, GeneProof has come up with a solution.

GeneProof developed this new product due to the major demand for it mainly in Western Europe and in response to the recent appeal made by the Czech National Institute of Public Health to diagnostic companies. In the coming few days, GeneProof will begin selling this new test throughout its entire distribution network covering more than 50 countries around the world.

This new testing product carries the CE IVD mark and is EU registered with the Czech State Institute for Drug Control, both of which are necessary for producing and selling diagnostic tests in EU countries. It is one of several diagnostic tests that GeneProof has developed to combat the COVID-19 pandemic. These tests have become popular worldwide thanks to their exceptional quality.

GeneProof boasts a team of experts that enables it to bring to market high-quality products that are constantly being innovated in response to current market demands and the development of the pandemic. In the coming days, GeneProof will be launching several other products for genotyping SARS-CoV-2 that reflect the specific needs of certain markets. The GeneProof team believes that this way it can effectively contribute to the global fight against the pandemic.

GeneProof is a Czech biotechnology company that has been active in the field of molecular diagnostics for 15 years. It is currently the largest producer of PCR tests in the Czech Republic and one of the biggest in Central Europe. GeneProof offers more than 40 PCR diagnostic kits. Its products are regularly tested and assessed by independent international panels, and always receive high scores. The exceptional quality of GeneProof’s products is not only the result of the company’s team of experts but also thanks to close cooperation on research and development with healthcare and academic institutions.