Czechs to Onset Aviation Revolution Thanks to CEAC-Developed Artificial Intelligence 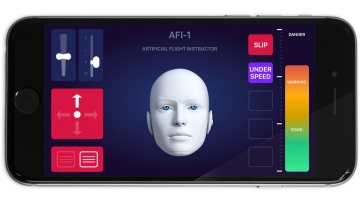 Alongside voice-based communication with the system, pilots can also watch the artificial flight instructor’s screen where errors in their piloting and recommendations for actions to be taken are displayed.

CEAC (Central European Aerospace Corporation, Ltd.), a Czech enterprise, intends to become the first company in the world to globally increase the aircraft operation safety employing Artificial Intelligence (AI). AI is to become the pilots’ everyday helper with the use of smartphones or tablets featuring the AFI-X application developed by the CEAC specialists.

“The project of employing AI is the next step within the development of the Czech Republic aviation and aerospace industry, bringing it closer to the world leaders of the segment. At the same time, it contributes to the needed transformation of our economic system from an economy built on low labour cost to the knowledge-based economy with high added value,” Milan Slapak, GE Aviation President for the Czech Republic and Slovakia, said. He primarily sees the AI advantage in decreasing the demands on pilots, which will directly lead to increased aviation operation safety.

The EU-funded project with finances managed by the Ministry of Industry and Trade of the Czech Republic has already attracted the attention of foreign investors, for example, from the U.S.A. and China. The AFI-X application will be launched globally by 2020 at the latest.

“Unlike cars, aircraft manoeuvre in a three-dimensional space, where the requirement on pilots’ skills is much higher as pilots must watch a number of parameters. A failure to stay focused may be fatal. Our analysis (see the chart below) shows that the count of incidents has an increasing tendency. The Artificial Flight Instructor (AFI, as in the AFI-X application) will voice the mistakes the pilot has made and suggest a way of their rectification,” Martin Balda, the author of the idea and the CEAC Executive Director, explained.

The AFI-X will greet the pilot after they enter the cockpit; tell them, for example, the speed and direction of the wind, the outside temperature and the weather forecast. In-flight, the app will add additional information and recommendations. After landing, it will praise the pilot form a flight well performed.

The AFI-X will serve both experienced pilots willing to improve their piloting skills and pilots who have just completed their basic training. AI will be able to observe and judge the pilot’s technique and suggest the aircraft piloting precision level - similarly to the principle of setting the level of difficulty while playing a video game.

“It is our goal to launch the first AFI-X AI generation by 2020. The AFI-X prototype will be finalised by the end 2019, followed by the product localisation and adaptation to the target Android and Apple IOS platforms,” Martin Balda noted.

The AFI-X Artificial Intelligence may remind you of Knight Rider, an American series starring David Hasselhoff, with an intelligent car called KITT, helping the main protagonist. Using its voice, KITT tells the action hero what to do. “There may be a certain similarity with the Knight Rider series,” Martin Balda admits, smiling. “However, the AFI-X AI developed by Czech specialists is by far more advanced than KITT. KITT’s sole purpose was to help the particular action hero. Our AFI-X has been designed in a way to help all pilots - of all levels, skills and years of experience,” Martin Balda concluded.