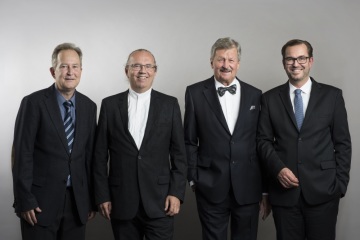 APA - Austria Press Agency and Schweizerische Depeschenagentur (SDA) have significantly intensified their relationship at the cooperative and corporate level: together with picture agency Keystone, the Swiss agency is merging into the integrated KEYSTONE-SDA Group. Already affiliated through the joint subsidiary Keystone, at the beginning of the new year APA will therefore become the Swiss news agency's biggest single shareholder with a 30 percent holding in the share capital.

APA and SDA, the respective leading news agencies in Austria and Switzerland, have been equal shareholders in Keystone, the biggest Swiss picture agency, for approximately ten years. The merger now planned by SDA and Keystone will enable an integrated multimedia supply of content from both agencies to Swiss media customers and communicators in text, image, graphics and video.

Clemens Pig, CEO and a member of the management board of APA Group, calls attention to the advantages of this new, in Europe so far unique news agency merger: "This transaction is a genuine win-win solution for all of the three agencies involved. The new KEYSTONE-SDA Group will be able to optimally handle every editorial requirement from a single source, particularly in the area of multimedia and visual news production. I am very much looking forward to cooperating with our Swiss colleagues and am firmly convinced APA's investment will involve a solution which is geared toward the future as well as the long-term invigoration of independent, multimedia and technology-oriented news agencies in both countries".

APA will provide its technological expertise in the development and operation of IT services for KEYSTONE-SDA and its customers as part of a long-term cooperation in the IT business. A wholly-owned subsidiary of APA - Austria Press Agency, APA-IT is Austria's leading IT information service provider in the fields of media solutions, IT outsourcing and content management.

The planned transaction will be carried out with APA swapping its current 50 percent stake in Keystone. "Originating from a long-term cooperation in IT with KEYSTONE-SDA, this investment represents for APA a milestone in the internationalisation of the Austrian news agency. Both sides have already succeeded at demonstrating their trustworthy and profitable collaboration in the ownership of Keystone over the last ten years. We are delighted about cooperating to carry out this cross-border investment and technology project and wish a prosperous future to the newly established Swiss news agency group together with APA", Hermann Petz, chairman of the management board, and Alexander Wrabetz, chairman of the supervisory board of APA - Austria Press Agency, point out.

"With the merger of SDA and Keystone our intention is to offer our customers high-quality multimedia information products comprising text, image, infographics and video. This reflects the changing needs of our customers and forms the basis for the company's strategic development", says SDA CEO Markus Schwab.

SDA chairman of the board of directors Hans Heinrich Coninx adds: "In an era of digitisation, combining competencies is an important step for media enterprises to succeed in the long term. The fact that APA is contributing its extensive technological expertise to the new KEYSTONE-SDA Group as part of this merger enables us to play an active role in these developments".

The transaction requires the approval of the respective competition authorities and the general meetings of Keystone AG and SDA AG and is to be retroactively implemented in the second quarter of 2018 as of 1.1.2018.

Schweizerische Depeschenagentur AG (SDA) is Switzerland's national news agency and is owned by Swiss media. In the three national languages of German, French and Italian it provides round-the-clock comprehensive independent news services on issues arising in the areas of politics, business, culture, social affairs and the arts. It therefore ensures the Swiss media a basic supply of news from at home and abroad. The guiding principles of the company, which was founded in 1894, are independence, solidarity and innovation. The range of services also includes holdings in other agency businesses such as pictures and financial news. Headquartered in Bern, SDA Group has 15 locations in German-speaking Switzerland, Romandie and Ticino.

Keystone was founded in 1953 as a Swiss subsidiary of the American "KEYSTONE View Company", which was established in 1891. Keystone is the leading picture agency in Switzerland and has over 75 employees. As a result of the global network of partner agencies and numerous freelance photographers, Keystone offers more than 15 million images on its database and has a historical archive of more than ten million images, which form an important part of the visual memory of Switzerland. In addition to the media, customers include companies, advertising agencies, organisations and associations.

APA - Austria Press Agency is the national news agency and Austria's leading information service provider. It is owned by twelve Austrian daily newspapers and ORF. APA Group is comprised of the cooperatively organised news agency and three wholly-owned subsidiaries and operates as a news agency, picture agency, in information management and in information technology. The editorial offices of APA ensure real-time news services in word, image, graphics, audio and video, while the subsidiaries provide distribution, research and knowledge management services as well as information technology solutions.