Marriage for All Comes to Czech Chamber of Deputies 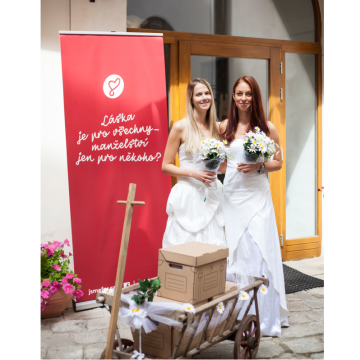 The lower house of the Czech Parliament is set to debate the legalization of same-sex marriage. On Wednesday, 31 October, marriage equality is for the first time in history guaranteed to be on the agenda of the 20th meeting of the Chamber of Deputies. The opening of this debate item will take place as part of the Chamber of Deputies' meeting, which starts at 14:30. The amendment is the third item up for debate in the afternoon program. The program can be accessed here: http://www.psp.cz/sqw/ischuze.sqw?o=8&s=20 (see fixed item 50).

In the meeting’s agenda, the first reading of the Civil Code amendment is to be included as a fixed item, which would open up the possibility of marriage for gay and lesbian couples. This is a proposal presented by a group of 46 deputies headed by MP Radka Maxová. The amendment has already gained support from almost the entire political spectrum (ANO, Pirates, ČSSD, KSČM, STAN, TOP 09) of the chamber. We expect a lively discussion on the subject, among other things, because the agenda also includes a constitutional amendment to define marriage as a union only between a man and a woman.

The amendment follows a country-wide debate led by the Jsme fér (We Are Fair) campaign, promoting the fair treatment of same sex couples. 67% of Czechs support marriage equality while 97% of Czech gays and lesbians want the chance to get married. Despite the fact that the Czech Republic has recognized registered partnership since 2006, full equality for same sex couples is still missing. This gap in legislation not only affects the couples but their families and relatives as well. This parliamentary debate is a real opportunity for the Czech Republic to become the first country in the post-communist block to break from its totalitarian legacy and give full recognition and equality to same sex couples.

Members of our initiative Jsme Fér, supporters from the LGBT+ community, family members of same-sex couples, and famous personalities will be present throughout the meeting, both in the Chamber of Deputies as well as in the Sněmovní 7 centre, where we will be following the debate online. It will be possible to contact any of them for comment or interview.

campaign Jsme fér (We Are fair)