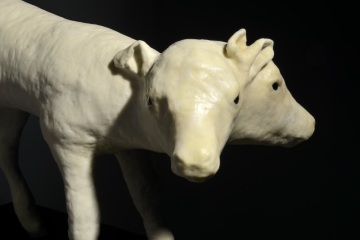 The largest solo show to date by Daniel Pešta (*1959) in the Czech Republic presents a cross-section of his work from the past ten years. The central theme of the exhibition at the DOX Centre for Contemporary Art is man’s biological and social determination, and the search for ways to escape it. Through various media, he touches upon the current social and political situation, which he reflects both from a broader historical perspective and a private, personal one. The exhibition will be on display at DOX until 7 May 2018.

In his work, multimedia artist Daniel Pešta often refers to the swagger of narcissistic leaders, the hypocrisy of organized religion, and the indifference of spineless individuals that led to tragedies like the Holocaust, but also to the current stigmatization of social minorities.

As the icon of his exhibition at the DOX Centre for Contemporary Art, Daniel Pešta chose a two-headed calf (Double Face, 2015), which watches visitors as they enter the exhibition. It is “framed” by two lit signs that refer to a person’s pre-determination, for one by their genetic makeup (I Was Born in Your Bed), and for another by how they are perceived by majority society (I Was Born in Your Head). The conflict between the individual and the anonymous mob is captured in stylized portraits that the artist faces off against mass scenes in which a person either becomes a member of an institution that relives them of responsibility, or on the contrary a nameless member of a minority group, and thus also a potential object of discrimination.

The exhibition follows several central, periodically repeating motifs that offer multilayered significance and context. One of them is Genetic Codes - assemblages created from photos from old albums encased in resin blocks that evoke the structure of the human genome. The faces and figures of what were once concrete people become mere building blocks that determine the fate of a future individual.

Another key element of the exhibition is a mask made from the artist’s own face - a symbol of pretence and loss of individuality. Multiplied, the mask creates an amorphous mass without personal features, without a narrative, in which the individual plays the role of a mere statistical record.

Daniel Pešta sees the human condition as a desperate Sisyphean struggle, depicted in his From Nowhere to Nowhere series of video art pieces. As a counterpoint to this morass, he uses the spiritual symbol of Jesus Christ. Stripped of direct religious context, this symbol is perceived as the embodiment of a free spirit that succeeded in defying biological and social determination. The Annunciation series contains a similar, though not wholly positive potential for hope. In Pešta’s depiction the promise that slumbers in embryos of future life has a disturbing ambivalence, something that is characteristic of his work.

At the 2013 Venice Biennale, Daniel Pešta presented his project criticizing the stigmatization of the Roma, entitled I Was Born in Your Bed. In subsequent years of the Venice Biennale (2015 and 2017) he was always represented by a separate room in the collateral event entitled Personal Structures. In 2017 he received the second prize in painting at the London Art Biennale for his diptych entitled Sorry. Pešta has had solo shows at the Museum of Cultural History in Osnabrück, the Museum of Persecuted Art in Solingen, the Gulag Museum in Moscow, Gallery Artinbox in Prague, or the White Gallery and in the Riding Hall of Castle Hill in Litomyšl. Daniel Pešta’s works have also been part of projects such as Where Is My Home and Brave New World at DOX.

High resolution photos are available for download at: http://www.dox.cz/en/press