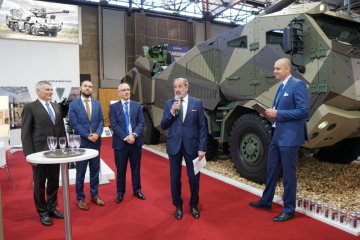 The most important European trade fair of military and defence technologies Eurosatory is currently held in Paris. On the very first day, several new products were presented in the world premiere at the joint stand of the companies of the CZECHOSLOVAK GROUP (CSG) holding and the TATRA TRUCKS car manufacturer in Kopřivnice. The greatest interest was raised undoubtedly by the new wheeled self-propelled howitzer MORANA, which is developed by the company EXCALIBUR ARMY. The official presentation was attended by the Ambassador of the Czech Republic to France Michel Fleischmann, Deputy Minister of Defence Tomáš Kopečný and President of the Defence and Security Industry Association of the Czech Republic Jiří Hynek.

MORANA is another addition to the company's portfolio of modern self-propelled howitzers. "We continue the tradition of the Czechoslovak defence industry, which has always belonged to important industries and exporters. To compete in the global market, we need to develop new solutions for the security of Europe and its partners. That's why we come up with products such as the MORANA howitzer," explained Michal Strnad, owner of the CSG holding.

The new howitzer has a 155 mm gun with a barrel length of 52 calibers. The weapon superstructure is mounted on a circular base in the rear of the carriage, with the power unit located behind the cabin. MORANA thus combines the advantages of lightweight wheeled self-propelled artillery systems of the TMG (Truck Mounted Gun) category and heavy artillery systems on tracked chassis. The MORANA howitzer is built on the proven Tatra Force 8x8 chassis, all chassis wheels are also steerable.

The howitzer has fully automatic reloading and fully automated gun guidance. The standard crew of the MORANA howitzer consists of the driver, commander and operator, who have their seats in the armoured four-door cabin produced by EXCALIBUR ARMY. The combat turret is fully controlled by the crew directly from the cabin, without having to leave it. The crew is therefore constantly protected during the movement of the howitzer and during its operation and combat deployment. The howitzer is also equipped with a remote-controlled weapon station with advanced sensory equipment and a 12.7 mm machine gun for self-protection.

At Eurosatory 2022, 1800 manufacturers and sellers of special equipment from more than sixty countries are exhibiting their products. The companies of the CZECHOSLOVAK GROUP (CSG) and TATRA TRUCKS present the Czech and Slovak defence industry at stand K528 in Hall 5A. "Our CZECHOSLOVAK GROUP considers Eurosatory to be a key trade fair for the presentation of our products in Europe. That is one of the reasons why we have the largest exposition of all Czech exhibitors," added Michal Strnad, the owner of the group.

CZECHOSLOVAK GROUP (CSG) is a holding following the tradition of Czechoslovak industry. It supports the development of traditional Czech and Slovak companies engaged in defence and civil industrial production and trade. More than 8200 employees work in companies incorporated into the CSG holding and in related companies. In 2021, the consolidated revenues of the holding amounted to CZK 14.4 billion. The main branches of CSG are mechanical engineering, automotive, railway, aerospace and defense industries. Thanks to the strong pro-export orientation of the holding, CSG's products can be found on all continents and the number of CSG customers is constantly growing.

In 2013, the joint-stock company TATRA TRUCKS took over the world-famous brand and Kopřivnice car manufacturer, which underwent a successful restructuring after a change in the ownership structure. In addition to standardized model series, it also produces special trucks tailored to the customer's requirements. The domestic markets in the Czech Republic and Slovakia are very important, a large part of the carmaker's production is also intended for export to dozens of countries around the world. Tatra Trucks a.s. employs more than 1200 people and more than 600 others work in the subsidiary Tatra Metalurgie a.s. focused mainly on foundry and forging.

Important notice:
Subscribers please note that material bearing the label "PROTEXT" is not part of CTK's news service and is not to be published under the "CTK" label. Protext is a commercial service providing distribution of press releases from clients, who are identified in the text of Protext reports and who bear full responsibility for their contents.